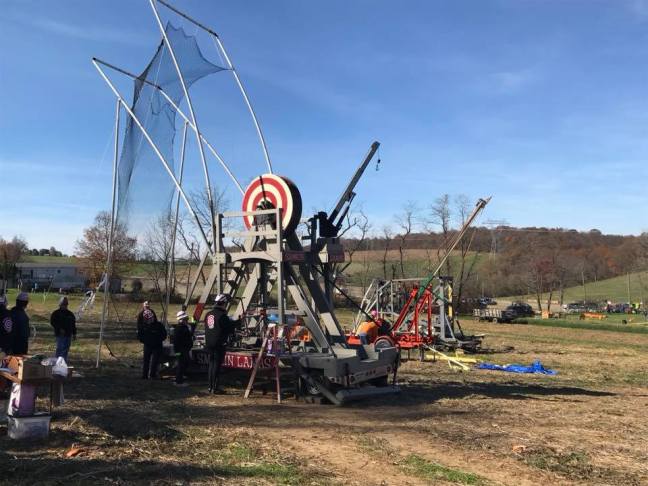 The artic temperature wasn’t the only BLAST on Nov 11, 2017.  The Pumpkin Olympics featured three Punkin Chunkin’ teams BLASTing pumpkins up to 2000+ feet, with the Smokin Lamas’ human-powered centrifugal machine leading the way! Chucksters and Tree Buckets also BLASTed pumpkins to the edge of the field.

Participants had a BLAST playing the 25+ pumpkin games, including the new additions of Hockey Scoop & Score, Pumpkin Pitch and Giant Pumpkin Checkers.  Pie Eating contestants BLASTed through a portion of pie, sometimes wearing more on the face than went into their mouth.

The day ended with a select group of Top Of The Hill winners rolling large pumpkins down the hill and watching them BLAST apart, and Null’s Towing BLASTing a giant pumpkin through the windshield of a Honda.  Then, the avalanche viewers witnessed 1000 pumpkins careening down the hill, BLASTing pieces high into the air.  The crowd finished off the day of fun by smashing and BLASTing the remaining pumpkins to smithereens.  Finally, the cows’ are having a BLAST cleaning up the carnage.

Glen Run Valley View Farm is owned and operated by the Jeff & Rhonda Stoltzfus family.  The small, quiet farm is a wonderful place to visit with your family to find fresh, sweet strawberries in the Spring, and a bountiful array of Fall pumpkins and decorations.